Running wild in the moonlight. 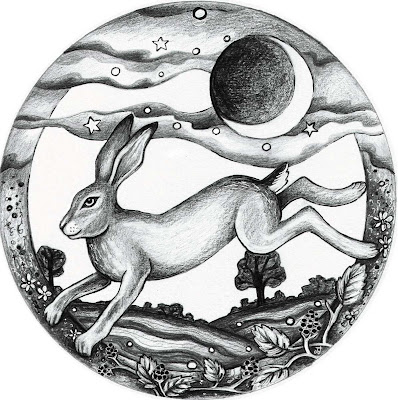 I've been working on some new ideas for the Poly clay. Something different that I don't think has been done before. I decided I'd like to depict a hare and the moon, and whilst looking for images on the web, found a real blast from the past - pictures from Kit Williams 'Masquerade'.
I think I must have been about seven when the book came out (was it 1979?) and I seem to remember my father bringing it home one day. The treasure aspect was exciting and fun, but what really astounded me was the art work.
I 'd stare at the pictures for hours. Partly to find all the extra little special details, but partly because I couldn't fathom how they could have been created from a blank canvas and paints.
I thought of those painting whilst I scribbled away at my hare. It's tonal pencil on paper, and it has blank, white spaces for good reason. I won't reveal the purpose until I've continued the project - but will show more as it progresses. I've digitally darkened the image a little (for future reasons!) So the original is not quite so dark.
Anyone else remember Masquerade?
Posted by Joanna Dover at 1:45 PM 1 comment: