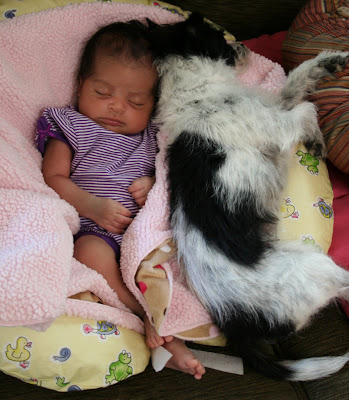 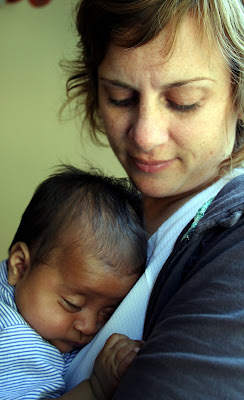 In the beginning you were small and fragile, and Cookie thought you were her puppy. She protected you, sitting and sleeping by you, watching bath time, and trying to help with feeding.
I had wondered how the dogs would be, suddenly having a new little person in the house, but I needn't have worried, as Pixie continued with her usually rituals and Cookie became Nanny.
In the beginning, you were actually smaller than Cookie, which almost seems impossible, and certainly didn't last for long.
In the beginning, you were Peanut, a little brown wrinkled cashew of a baby, with character unknown and future uncertain.
Posted by Joanna Dover at 11:00 AM 2 comments: 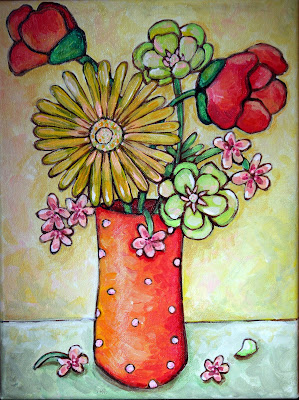 The weekend (just gone) marked the seventieth birthday of Nancy - a friend of mine. I wanted to give her a token of sorts, but didn't want it to be fresh flowers, as seventy years almost needs something more special than that. So I decided to paint her some flowers instead!
The style is a bit of a departure for me - and why not! it feels good to try something different, and the style suited the current lack of concentrated time I have for doing things like painting, so all round it seemed like a good idea.
Peanut's finalization went well - actually I guess I can say 'Marli' now, since that is her name and she is now officially ours. I will post a picture next time.
Posted by Joanna Dover at 3:37 PM 2 comments: 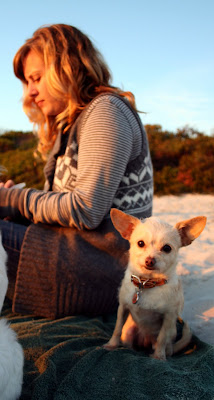 Ups and downs and round and round. Sometimes it's just like that.
That's been life for a few months now, and I'm old enough (and hopefully wise enough) to roll with it, and either watch as things unfold, or read the signs that guild you forward.
The house is now on the market, and we have had several viewings, so that's a good thing. Six weeks ago my husband was laid off from work, but I am happy to report he started a new job yesterday, so we feel very lucky that it was for such a short time.
In Peanut news - we finally have a date for finalization! so on April 22nd, we go to court and she will be ours forever. Then I can talk about her as much as I want and show pictures etc, so expect more Peanut news in the future. It's been strange, as she is obviously a huge part of our lives, but I really haven't been able to mention her here too much, whilst she 'belongs' to the state.
Things are starting to shift. Unknowns are becoming knowns, and piece by piece the puzzle is becoming clear. Meanwhile, dear sweet Pixie continues with her daily routine of sleeping, eating, sleeping, grooming,sleeping, sleeping, and refusing to come for a walk - preferring to stay at home and, er, sleep. Amazing how someone within the household can be so unaffected by it all. Especially amazing as, by contrast, Cookie sees it all, and has taken to following me everywhere (even the bathroom) to make sure she doesn't miss out on anything that might happen.
In cat news, I finally caved to poor Kitty's mewing and upset one night, when we came home from a trip, and carried him (pretty sure now it's a him) under the house and made a bed from a box and blanket, and have been feeding him ever since. He's so friendly and wanting of affection, that he has to have been some ones at some point. I'm looking out for 'lost' signs, in case I find one that matches. He would probably be in the house by now if it wasn't for Cookie and Pixie's constant vigilance on Kitty patrol. But I think they are unlikely to let that happen.
Posted by Joanna Dover at 11:13 AM 3 comments: