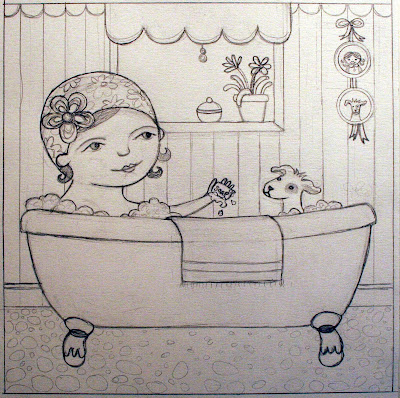 I have started work on a new painting in the 'Bunny and Boo' series, here is the pre-paint sketch. This one features bath time, with a reluctant looking Boo staring at the soap in Bunny's hand. Cookie is a reluctant bather too, so I can't blame Boo. I think it's a small dog thing.
Speaking of small dogs, I had a peculiar conversation with my husband in the middle of the night, it went something like this:
C: weird! I just had a dream that had a dog the size of a breadcrumb, walking along the branch of a tree. He was called Mr Wellington.
J: OK, I like the sound of him, what was he up to?
C: Well, he stopped to let a caterpilla cross. Actually , he was more the size of a crouton.
J: Sounds like the kind of dog that would live at Potterton Marsh. Hope we see him again.
So there we have it. Incidently - for a while I did have an imaginary dog called Mr Buttons (co-incidence?) who was a serious fellow with his own suitcase. This was before the arrival of the real buttons: Pixie and Cookie, and possibly inspired my looking for dogs that small (Mr Buttons was diminutive in size) Mr Buttons has been known to visit us in America, but travels extensively, so we really don't see him often.
Well - who knew that story would pop out the magic bag today!
Oh - just realized there are no faucets on the bathtub, oops!
Posted by Joanna Dover at 8:50 AM